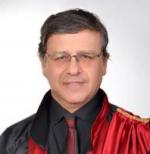 Ses
Who is Akın İşcan

Prof. Dr. Akın İşcan was born in Edremit (Balıkesir) in 1961 and had completed his primary and secondary education in Aydın. His decision to become a pediatrician belongs to a period of time when he was diagnosed with a disease at 11 years old and pediatricians had taken good care of him. He had graduated from Nazilli High School in 1978 and started his university education in Cerrahpaşa Medical Faculty. He always sat in the front row of in classes to listen closely to his teachers, all of whom were very valuable in their fields. He completed his medical education in 1984 with a high level of success. He had performed his compulsory service duty as Gökçebey (Zonguldak) Health Center Physician between 1984 and 1987. He had observed the positive aspects of putting stitches in, removing foreign objects from the nose, inserting a urinary catheter, treating mandibular dislocation and many other skills during his university years in the health center days. At that time, the greatest reward for him at his work at the health center was the return to life of an eight-month-old baby who was hospitalized and diagnosed with bronchopneumonia and heart failure. The compliment he had received from the child specialist of the district was: “My dear colleague, the baby was saved thanks to your early diagnosis. I hope you will specialize in pediatrics in the future”. He had already aimed to become a pediatrician at that time, but the words of his colleague was honorable for him. Throughout his professional life, he had adopted the principle of approaching his young colleagues similarly, in a supportive manner. His duty as a physician in the Karabük Tuberculosis Dispensary in 1987 had given him experience in tuberculosis. He had completed his Pediatric Health and Diseases specialization training in İzmir Tepecik Training and Research Hospital Pediatric Clinic between 1988-1992. His thesis in medicine in which he had focused on febrile convulsion cases, had been an important factor in choosing the pediatric neurology major. Even though he had received the specialty exam report which estimated that he will be able to manage a clinic, he had chosen to step into academic life at Celal Bayar University in Aydın in the fall of 1994 with his interest in development, renewal, education and training and his desire to conduct scientific studies.The reason for this choice was his desire to contribute to the preparation of a personalized and dynamic future for each student and to benefit from developing opportunities and technologies by opposing the approach of loading theoretical knowledge into the brains of medical students that they will not need in the future. He had stressed to his medical students that being humble is invaluable. Instead of giving fish to them, he had taught them how to fish. With his first published scientific studies, he had received an invitation letter from the Academy of Sciences. His research had been rewarded with TÜBİTAK incentive award many times. After passing the associate professorship exam with outstanding success in 1999, he had completed his pediatric neurology minor specialization training at Dokuz Eylül University in 2001-2004. He had returned to Harran University in 2004 as part of his compulsory service. He had been appointed as a professor in 2005. As a member of the Ministry of Health Medical Specialization Board Curriculum Formation System (TUKMOS) between 2009 and 2010, he had taken part in determining the curriculum standards for Pediatrics Specialization Education in Turkey. He had served as a member of TÜBİTAK Scientific Project Evaluation Panel in the 2000s. He then had continued his duty at Şanlıurfa Harran University voluntarily until 2011. Between the years 2012 and 2021, he had worked as a faculty member and Head of the  Department of Child Health and Diseases at Faculty of Medicine at Bezmialem Vakıf University. He had taken part as a principal researcher in hundreds of scientific research projects supported by CBU, HRU, BAVU, IU and TÜBITAK. He had been responsible for the training of many assistants and medical students, both as a trainer and as a training planner. Within the scope of his administrative and educational duties, HRU Faculty of Medicine Term Coordinator, HRU Education Coordination Committee Member, HRU Postgraduate Education Committee Member, BAVU Clinical Research Ethics Committee Member, BAVU Faculty of Medicine Faculty Board Member, Departments at CBU, HRU and BAVU, HRU He served as the Head of the Internal Medicine Department and a Member of the Hospital Board of the HRU Faculty of Medicine. Based on the fact that learning is a never-ending dynamic process, he had participated in many scientific congresses and courses both in Turkey and in several countries throughout his professional life, presenting his scientific studies or taking place as a speaker or session chair. Prof. Dr. Akın İşcan has 44 scientific studies published in international journals. Nearly 600 citations have been made to his scientific publications. He has authored a book on common cerebral degenerative diseases. He served as a referee for the evaluation of scientific publications in the European Journal of Pediatrics, Journal of Pediatric Neurology, Journal of Pediatric Epilepsy, and Turkiye Klinikleri Pediatrics journals. He is a member of The Asian and Oceanian Child Neurology Association (AOCNA). His profession is in following areas: follow-up and treatment of premature and risky babies, delays in developmental stages, loose baby (hypotonous baby), epilepsy, febrile seizure (febrile convulsion), convulsions (holding breath) and other conditions that mimic seizures, which are the main subjects of pediatric neurology specialization, cerebral palsy, mental retardation, speech disorders, speech delay, autism and pervasive developmental disorder, increased intracranial pressure, facial paralysis, migraine and non-migraine headache, dizziness (vertigo), childhood movement disorders, Guillain-Barre Syndrome. He has been carrying out his studies in his own health clinic since 2021, based on years of experience in muscle diseases, tuberous sclerosis, neurofibromatosis, progressive brain-destructive diseases, optic neuritis (eye nerve inflammation) and myelitis (spinal cord inflammation).

Copyrights © 2020 All Rights Reserved. Powered by akiniscan.com - Design By Ceotech